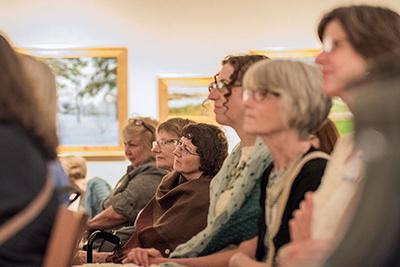 The 2015-2016 Founder’s Award, presented by Founder Nancy Gaucher-Thomas, was awarded to co-recipients Paulette Miller, Denise Bass, Ken Steinkamp, and Rachel Brask Hutchinson.
Bunny Harvey, the Elizabeth Christy Kopf Professor of Art at Wellesley College, is a mainstay of the Rhode Island art community. In her talk, titled “The Long Run,” she discussed her artistic process, her current work, and her impressive 40-year career as an artist and professor. “I like the idea of the hidden,” said Ms. Harvey. “I like the idea that we can walk through a landscape and not know what’s really there. There’s so much that is hidden, and that’s what I want to represent [in my work].”
Paulette Miller, Interim President of ALRI  stated, “I am humbled by and appreciative for the high level of work performed by the team at ALRI. Many thanks goes to Providence Art Club and Seb Borges for providing such a beautiful venue and wonderful hospitality, as well as Bunny Harvey, a fabulous teacher, artist, and motivator.”
Written by Magen Mintz
Photography by Denise Bass

Art League RI is pleased to showcase Heather Stivison on Artsy! Visit Artsy.net using the link in our bio to view these spectacular acrylic paintings by Heather🎨🎉
Synergy Part II is officially on display at Falmouth Art Center until January 30th! Thank you to all who came to the opening reception on Friday!